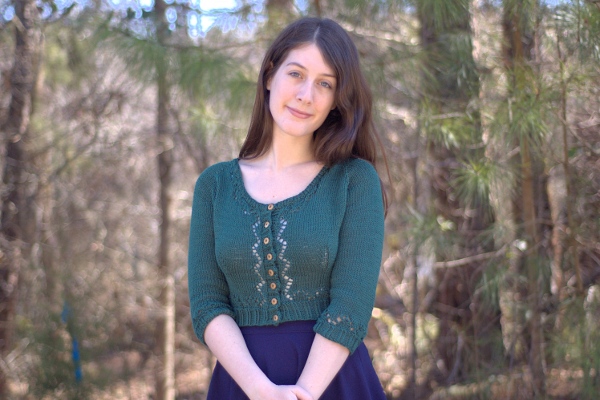 It’s a good thing I sew, because if I had to count on knitting projects only to fill this blog, we’d still have a long way to go: I started this cardigan last May, which means it took me a little less than a year to finish it! It is not such a big project, and with US6/7 needles it knits up pretty quickly, but I am very irregular in my knitting habits. I still managed to finish it in time for Spring and I’m glad because it is great! 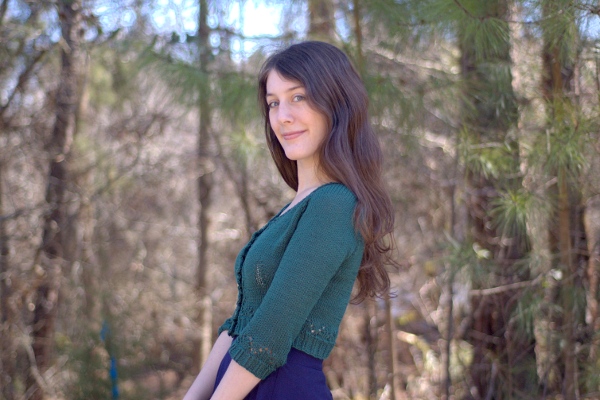 The pattern is the Miette cardigan, by Andi Satterlund. I really like her patterns and the retro style of her cropped sweaters and cardigans. Apparently she is also renowned for proposing construction methods that avoid the need for seaming (knitting in the round, picking up stitches, etc.), which makes the whole process much more enjoyable than the Phildar patterns I was used to. Miette was my first time knitting one of her patterns and I am hooked!

I had a crush a while ago on the Kelly green version made by Tassadit, and apparently her version got printed in my subconscious because when it came to buying yarn to make it, I could only picture it in green! I bought the yarn during my stay in Los Angeles two years ago, I wanted to try Cascade Yarns and I settled on Ultra Pima, a shiny 100% cotton that almost looks like silk… in green of course. By the way, it’s good timing, because we’re celebrating St Patrick’s day this weekend, and the name of the colorway is Shamrock 🙂 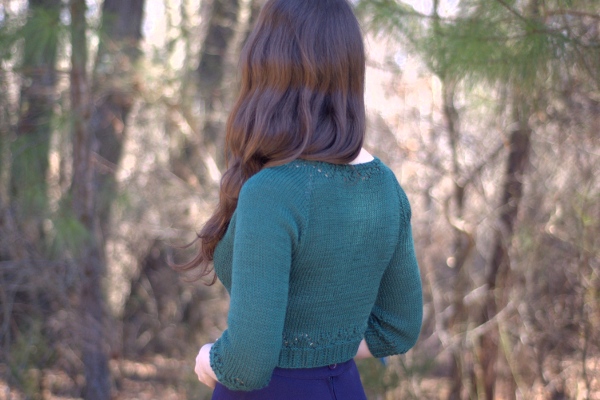 Since the gauge of the Ultra Pima was a bit different than the pattern recommendation, I followed the advice from several Ravelry users and went up one size for the pattern and down one size for the needles. Since my measurements pointed me to the 34” size, I followed the explanations for the 38”, and used US size 6 and 7 needles instead of 7 and 8. As a result the fit in the bust, shoulders and back is spot on. 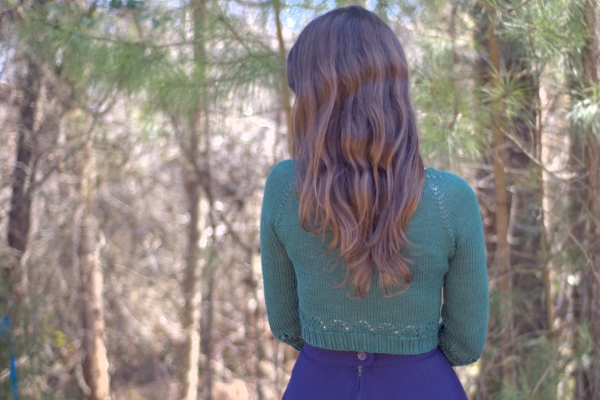 The cardigan is knitted top to bottom. As it was progressing, I started to get doubts about the lace that wasn’t very visible and looked more like failed increases than something intentional. After casting off, I steam blocked it pretty haphazardly, by laying down on my ironing table and drenching it in steam, without pinning or anything (I was afraid I would end up with a too large cardigan), and it really helped to have more defined lace sections, as well as more regular stockinette in the body and sleeves.

I am a bit disappointed by how the buttonband looks, however. I had a lot of trouble finding acceptable buttons (I can’t believe how little choice there is around here, I miss Paris so much on this aspect!), and so the only tolerable wooden buttons I could find were smaller than the size that the pattern asked for, so I had to sew shut parts of the buttonholes. I don’t know if it’s related, but I find the band to be quite wavy. I had read Lladybird’s tutorial on stabilizing buttonbands with ribbon but I was too afraid to try. Next time I’ll do that for sure.

I really like the way that the shaping is done in this pattern, with dart-like decreases under the bust that create a true 3D shape instead of having increases/decreases near the side seams like lot of patterns do. However, the decreases are very visible on my cardigan. I’m assuming that it is mostly because of the cotton I used, but I’m not liking the bust holes that much. 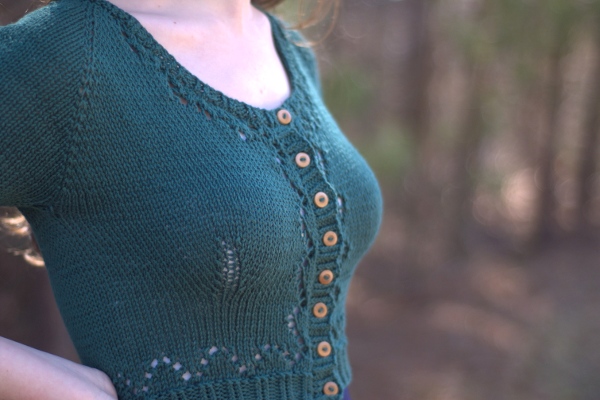 Except for these details I am completely sold, and I’m looking forward to making another one of Andi’s patterns (Chuck? Myrna? rhaaa too many pretty ones!). I still wonder if I should lengthen the next one a bit. I followed the instructions to the letter for this one, but I did not think that by going down one needle size I might end up with a shorter length (duh!). I do like cropped-length for cardigans, but this might be just a bit too cropped, as it reaches just above the top of most of my high-waisted skirts. Next time I’ll have to remember to measure! 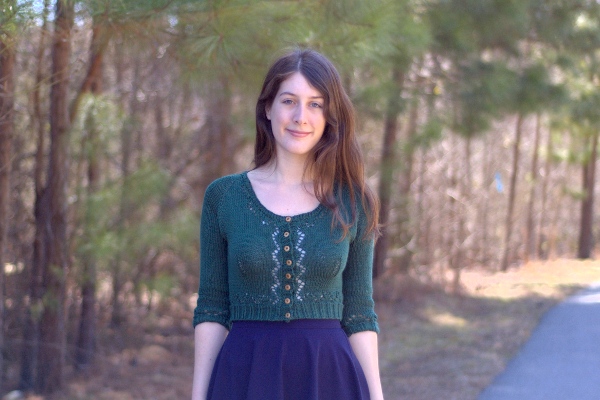