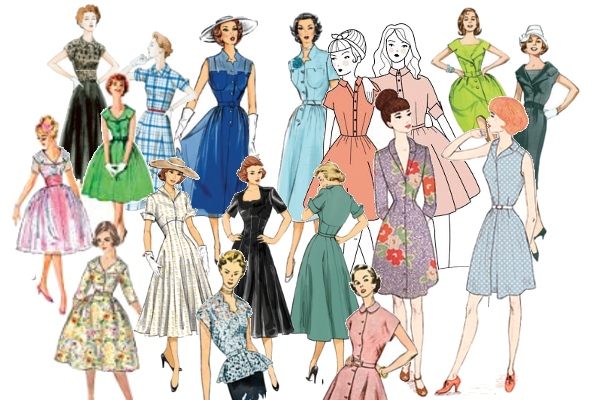 Ever since I made my gingham shirtdress, I am completely obsessed with this type of garments. I see them everywhere, I think about them all the time, and I feel like my wardrobe needs a lot more buttons and collars. Given that in the past ten years I have accumulated a pretty big number of sewing patterns, from magazines to Big 4 to indies, I have a lot of options when it comes to picking which one should be my next shirtdress project. So I felt like it might be interesting to share my selection with you. Most of these are already on my shelves, and a few are still on my wishlist waiting for the next pattern sale at Jo-Ann. Actually, the Sew Over It shirtdress was also on my wishlist, but after seeing Emilie’s version while preparing this post, I couldn’t resist and I ordered it as well. As if I didn’t have enough patterns already!

Unsurprisingly, almost all the patterns on my list have some kind of retro feel, with a fitted bodice, a defined waist and a flared skirt. There are some other shapes, such as the Grainline Alder Shirtdress for instance, that I like on others but that don’t really work with my style or body shape. I’m not so sure about the latest Sewaholic patterns either: I really don’t get the Harwood dress, and I think that the bodice of the Nicola might be too blousy.

So sure, looking at all these patterns, there might be a couple that seem well… exactly similar. But the nice thing with shirtdresses – or just regular shirts by the way – is that they are full of little details: collar, sleeve cuffs, plackets… So all of these patterns have a little something that makes them different. Still, I tried to present them here using their line drawings rather than the finished garment pictures, so that it’s easier to compare the design details and see the similarities and differences without getting fooled by styling, fabric choice or packaging.

First, let’s start with the staples, these patterns that you see everywhere on the blogosphere. On the indie side, everyone seems to have made the Pauline Alice Cami. It’s a pretty simple pattern, with a gathered skirt, waist darts, and a classic shirt collar with a collar stand. I have seen a lot of different versions of this dress that I really like, and I have a checkered shirting cotton in my stash that is waiting to get sewn into a Cami. 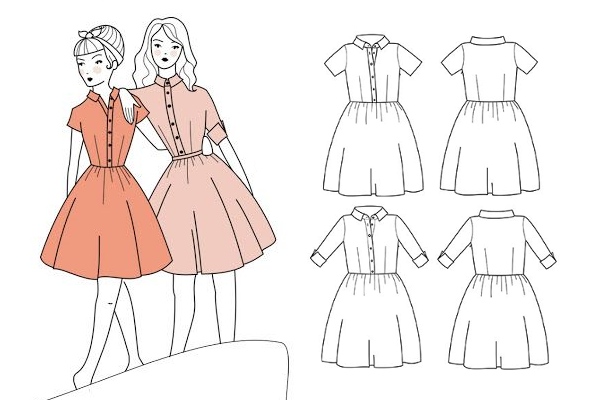 As far as Big 4 patterns go, McCall’s 6696 seems to be the clear winner. Unlike the Cami, whose skirt doesn’t have buttons and that closes with a side zipper, this one has buttons all the way down. Also a waistband, more darts at the bust, pleats instead of gathers for the skirt, and a yoke and gathers in the back as well. 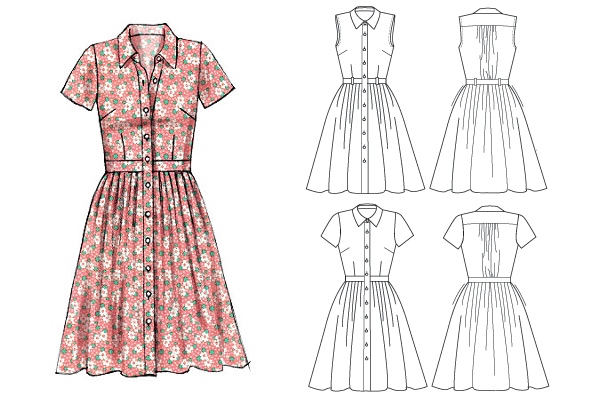 McCall’s 6696, made by Cashmerette, Dolly Clackett, Diary of a Chain Stitcher and Sew Dixie Lou

Another popular pattern is Simplicity 2246, by Lisette. This pattern has several variants for the skirt, collar and sleeves, and it’s no surprise that the ones I like the most are the ones with a waist seam and a flared skirt. 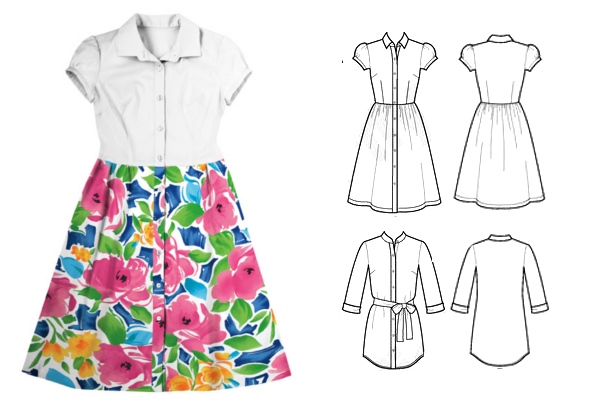 Simplicity 2246, made by Carlotta Stermaria, Four Square Walls and Experiments and Accidents

The previous three patterns all have a classic shirt collar, with a collar stand. Another style that is popular is the notched collar, such as the one on McCall’s 6891, that also has a circle skirt instead of a pleated or gathered one. 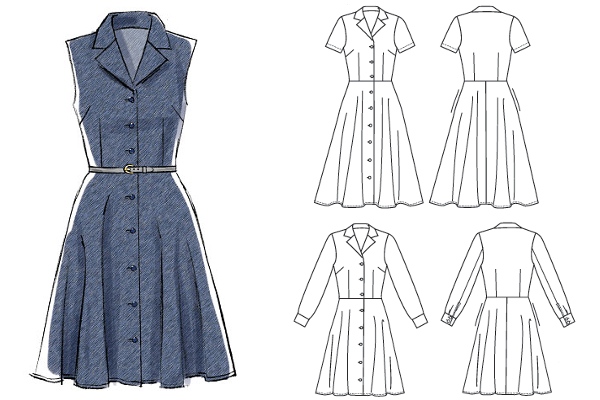 McCall’s 6891, made by Mother Tucker, Annabellebumps and Spoonflower

The shirtdress pattern from Gertie’s New Book for Better Sewing looks a lot like the McCall’s pattern from the front, but is different in the back: it has shirring at the waist to be more comfortable, and a yoke in the back as well. 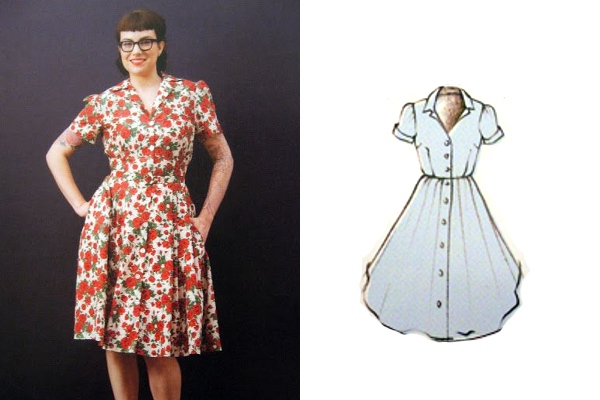 The Vintage Shirtdress from Sew Over It also has a notched collar, but this one is rounder. The skirt has less flare and has darts. The waist darts on the bodice are replaced by a combination of pleats at the waist and gathers at the shoulder yokes. 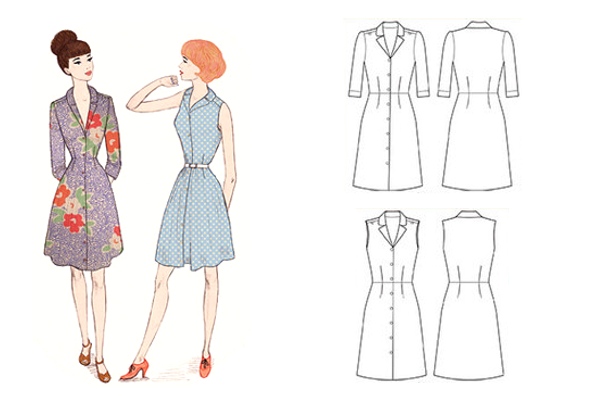 Vintage Shirt Dress de Sew Over It, made in two colors by Sew Over It, in a solid by Emilie, and in a print by Dolly Clackett

Another, even more retro collar, is the wide lapel one, like on this La Mia Boutique dress I made a few months ago. 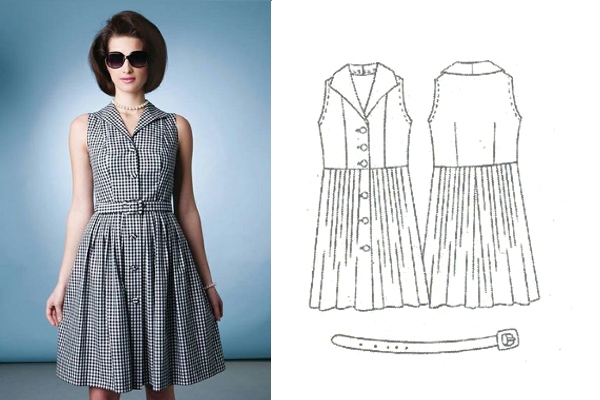 In my collection I also have these two Simplicity and Butterick patterns that look a lot alike. They are both reprints of patterns from the end of the 50s / beginning of the 60s and both have the same very wide collar, that extends up to the shoulder. 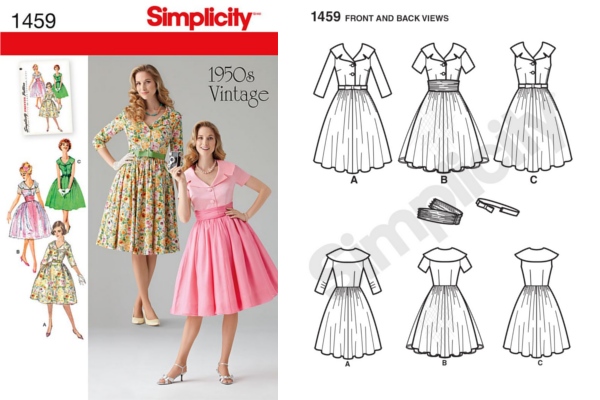 Simplicity 1459, made by Scruffy Badger and Bobbin and Baste 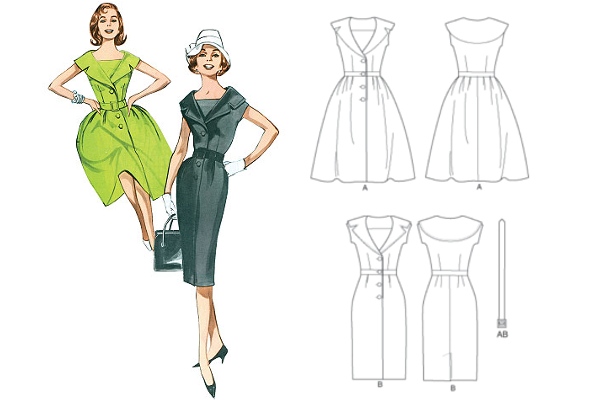 Butterick 5747, made by Julia Bobbin and Lilacs and Lace

There are many more possible collar variations. One that I like a lot is the one on the Hawthorn dress by Colette Patterns. 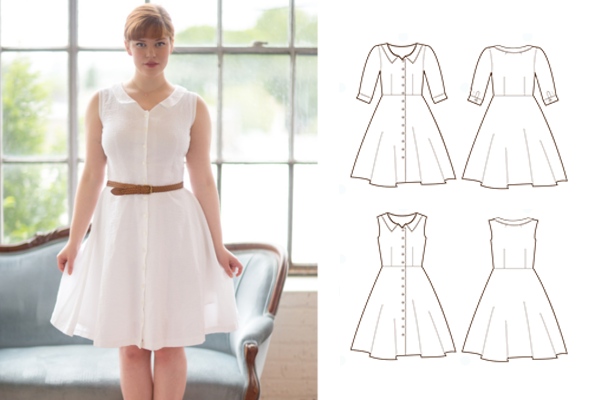 Colette Patterns Hawtorn, made in chambray by Sandra, in a neolithic print by A Stitching Odyssey, and florals by L’énervée de la machine à coudre

McCall’s 7084 has two collar variations: a classic shirt collar and a mandarin collar made from the collar stand piece. 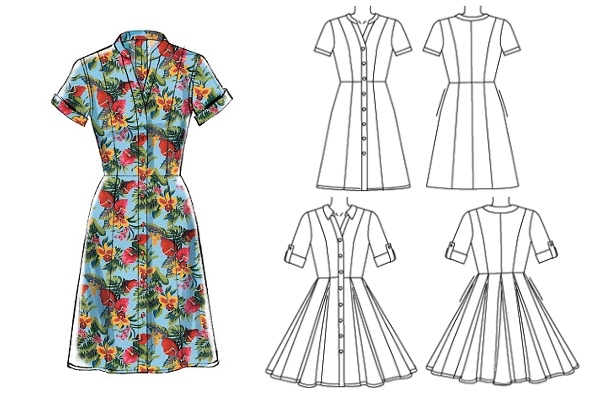 McCall’s 7084, made in dotted fabric by Sew Anita and as a wedding dress by Sew Pretty in Pink!

Another possibility is to get rid of the collar altogether, like on this reprint of a 1951 Butterick pattern. Here the raised neckline is simply formed by the bodice pieces. 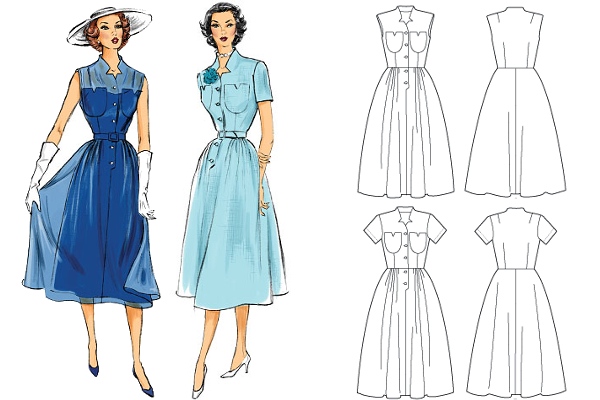 Butterick 5920, made by Sewist Stitch, Mode de Lis, and Wanderlost

On some patterns, the masculine details that come from men’s shirts are replaced by more “feminine” elements: rounder shapes, puff sleeves, bows… One of my favorites is the Bleuet dress by Deer&Doe. I made one a couple years ago, but I rarely wear it because the fabric is not great and the seam finishes are even worse. I’d like to make another one in a better fabric, with maybe some extra length in the skirt. 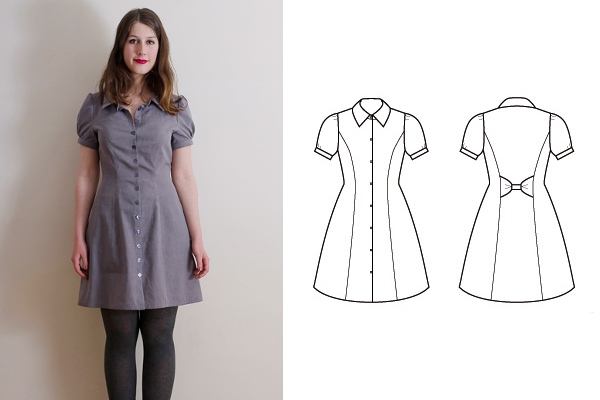 The Clara dress by Sew Liberated also has puff sleeves but those also have a biais-bound opening that I like a lot, and a flat collar on a lower neckline. I’ve had it in my list for a while but I have yet to find a fabric that inspires me to actually sew it. 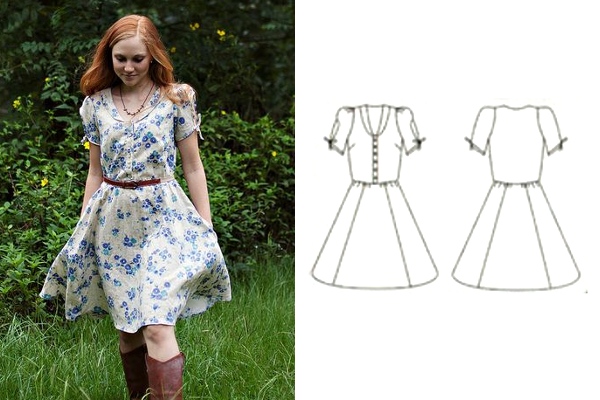 Most of the patterns I like are inspired by the fifties / early sixties era: a defined waist and a flared skirt, with gathers or pleats. But I also have my eye on some forties-inspired ones, with stronger shoulders and/or less flared skirts. For instance, these two patterns from old Burda issues: 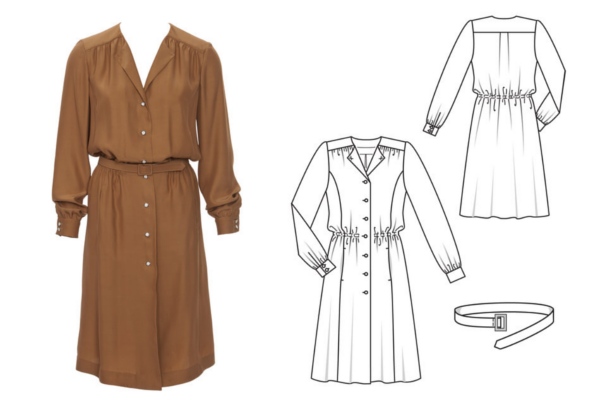 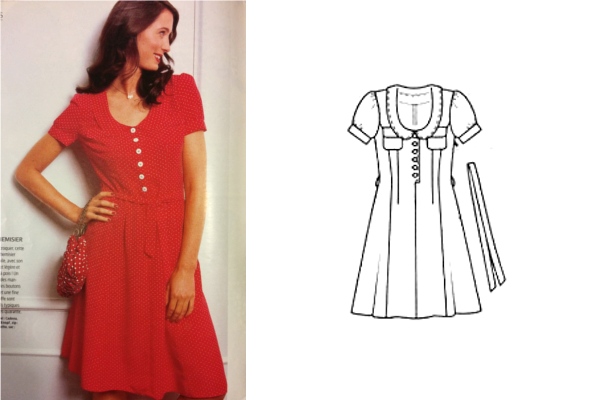 I’ve also just found out about the Melissa dress by Muse Patterns. I have never sewn with this brand before, but the pattern was in the Sew Indie Month bundle (that is only available until Wednesday!) and even though I wasn’t taken with the pattern pictures at first, after seeing a few versions of this pattern online I’m really liking the V-shaped pockets edges. 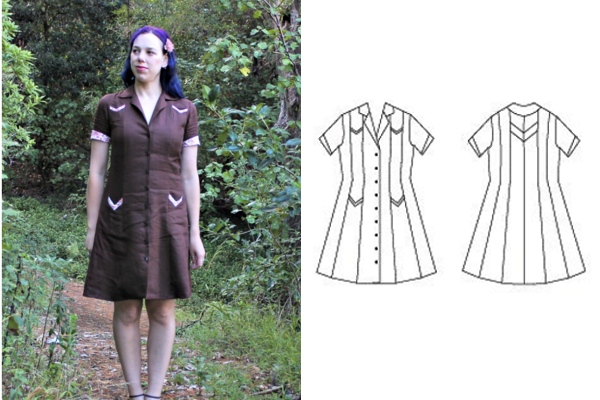 Melissa by Muse Patterns, made in colorblock by Sew Pretty in Pink and in polka dots and lace by Kat

Another pattern that reminds me of the forties is the Ceylon dress by Colette Patterns, one of their older ones. The number of buttonholes is a bit scary, but the neckline shape is unique. 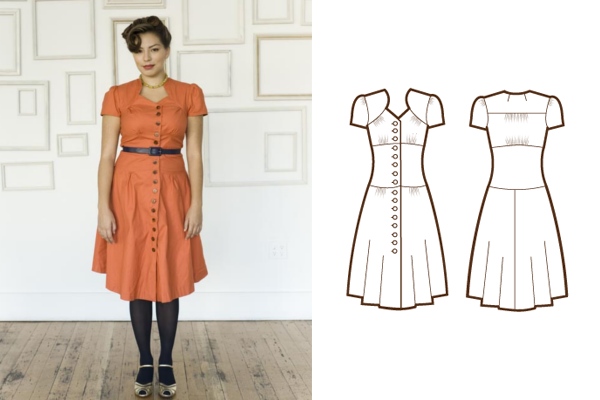 Another detail I like a lot is the pointy cuffs of these two patterns, Butterick 6018 and Vogue 9000. They are vintage reprints as well, the Butterick is originally from 1952 and the Vogue from 1951. I’m especially intrigued by these two as I haven’t seen them sewn online yet. 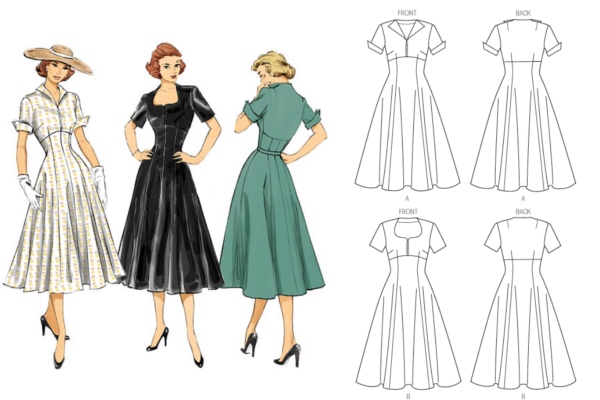 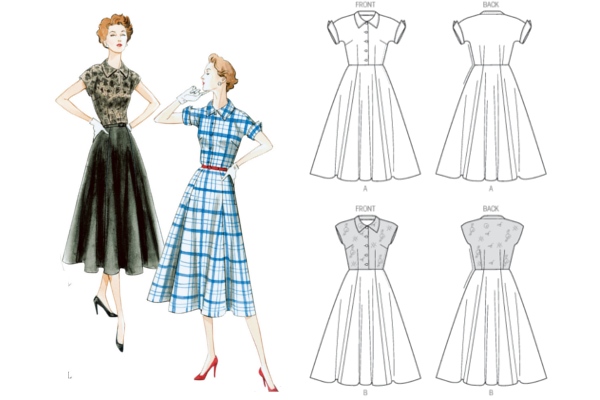 If none of these options appeal to you, there is still some hope: turning an existing regular shirt pattern into a shirtdress. A good example if the Bruyère shirt from Deer&Doe : the skirt panels can be lenghtened, or swapped for a gathered or pleated skirt. 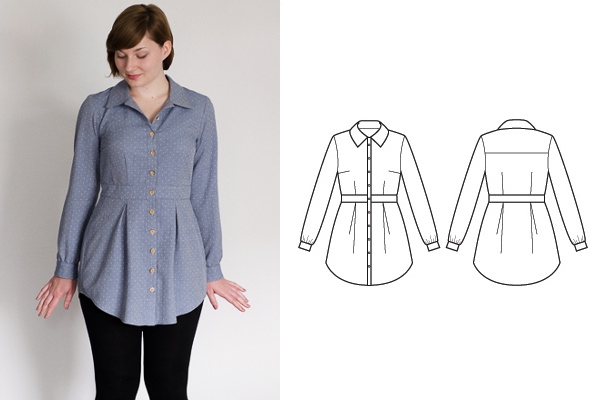 Bruyère by Deer&Doe, made into a dress by La Couture Rose and Cocoti Cocota

Simplicity 1460 is also a good contender, as it already has a peplum that can simply be lenghtened to form a skirt. 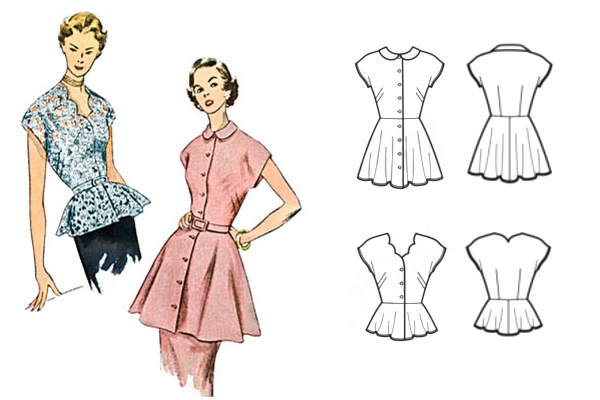 Simplicity 1460, made into a dress by Tasha Sews and Autumn Yards

Alright, well that should be plenty of options! Seeing anything you like? Do you have any other shirtdress patterns you’d recommend?