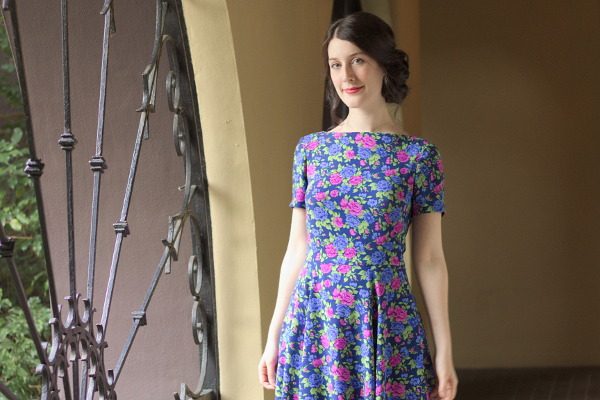 One more wedding-themed post today with my latest dress: a floral rayon number I made to attend a wedding in New Orleans in March. The pattern came from Boundless Style, a book written by Kristiann Boos from Victory Patterns, and it’s time to share my feelings about it. 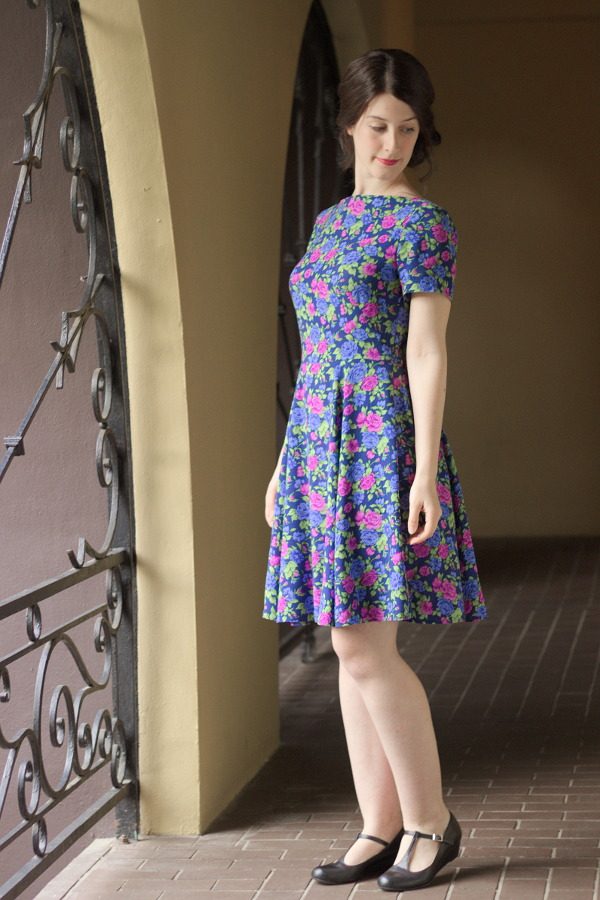 Boundless Style is a “mix-and-match” pattern book: it contains the patterns and instructions for 5 bodices, 5 skirts and 5 sleeves, most of them with several variations, which can be combined to make a complete dress. Back when the book was announced, I had a huge crush on the few available pictures: the retro feel and unusual lines of the patterns seemed up my alley, and also I thought that the dress made from the Billy bodice was a shirtdress (but it’s not, it just has a collar, welp!). What led me to pre-order it was the online app, Lookbook, that lets you create dresses by picking the line drawings of the different parts; it feels just like this game “Dessinons la mode” that I was dreaming to own as a kid. I spent hours on the app imagining associations, and I was curious to find out if the actual patterns would meet my expectations.

Then the book came out, and a horde of enthusiastic reviews and giveaways took over the blogosphere… unfortunately nearly none of the bloggers actually tried the patterns! All in all I have seen only four dresses made from it: by Peneloping, Sew Well, Oonaballoona and Very Purple Person. And I haven’t been able to find any that was made by someone who didn’t receive the book for free in exchange for a review..! Note that I’m not challenging the integrity of the bloggers who got the book as a gift. I am just genuinely surprised to have seen so few examples of the book in the wild given that most people seemed to love the aesthetic and the concept… 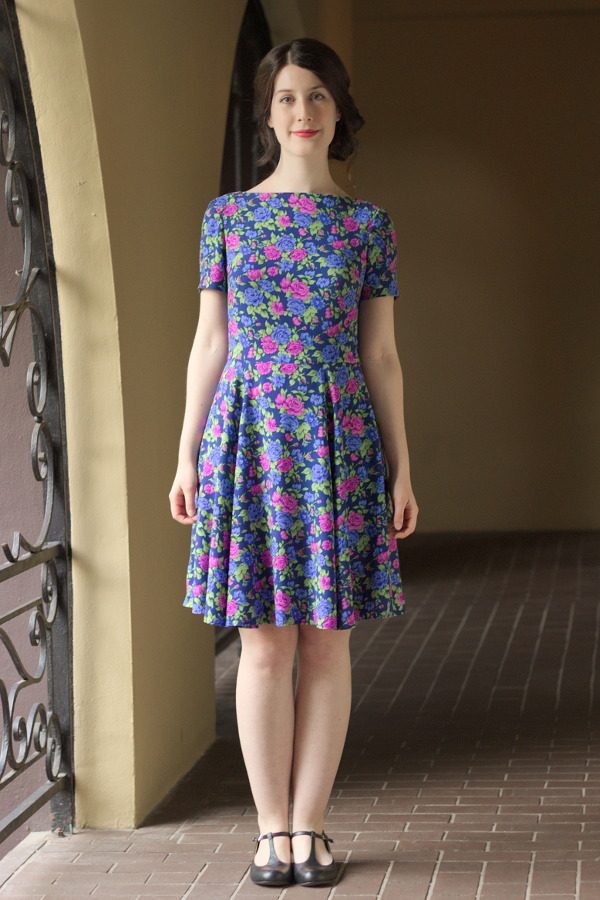 Anyway, I felt like trying it out, and I decided for the following patterns: 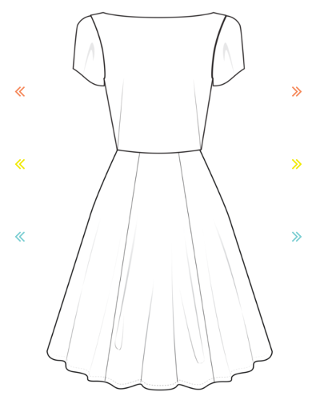 • The Jackie bodice, which features french darts, a very high neckline in the front and a low crossed back.
• The Meryl dress, made up of six panels, the fullest skirt in the book (I wanted to wear it with a petticoat but forgot to pack it, too bad!).
• The Grace sleeves, simple short semi-fitted sleeves.

I made a size 4 based on the measurements chart, which was consistent with the size I used to make a Madeleine skirt from the same brand a few years ago. 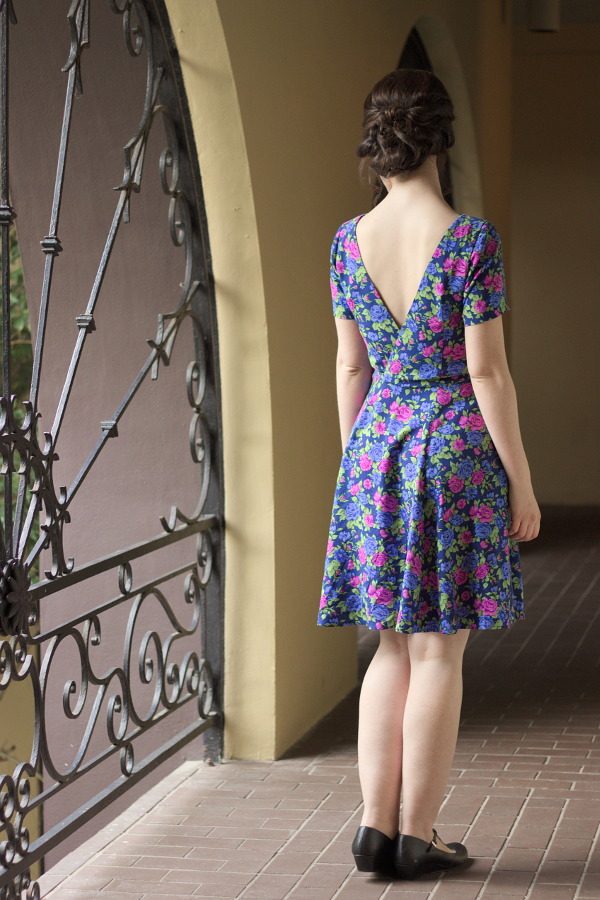 The book does not come with a pattern sheet. Instead, patterns are provided on a CD-Rom, with an individual pdf for each bodice, skirt and sleeve. Printing only what you need is a good idea in theory, so I was disappointed that all the variations of a single pattern came in the same pdf, instead of allowing them to be printed separately. In order to get the short Grace sleeve pattern, you have to print the 3/4 and the long sleeve as well, and that’s six pages that are going straight to the trash. I don’t mind that the patterns come on a CD-Rom, since apparently now you can download the pdfs online if you don’t have a CD reader, but it’s too bad to end up wasting paper and ink anyway.

The book also contains instructions for each pattern: they tell you how to assemble each bodice, skirt and sleeve, and how to put all these together into a dress. Each step is illustrated with a picture (as opposed to a drawing). The instructions include things such as adding a waist stay, which is a detail I particularly like, especially with a skirt that has so much fabric. 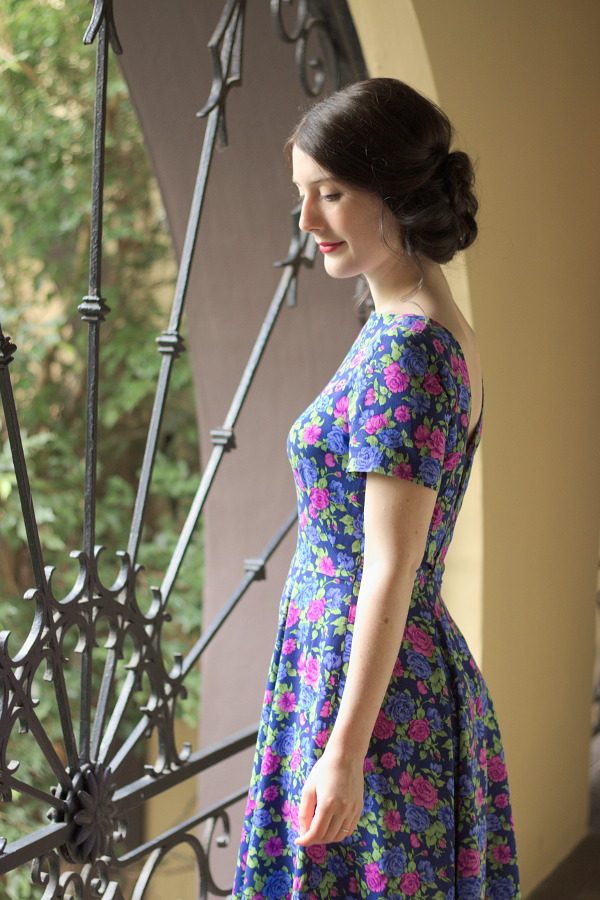 Anyway, the bodice also gets its share of stay-stitching: instructions are to do it on the biais edges of the back bodice, 5/8” from the edge. But a few steps later, in the middle of a paragraph, one discovers that the seam allowance of these edges is only 3/8”. So the stay-stitching ends up being on the outside of the garment… I was pretty angry when I spotted the error, because unpicking a stitching line on the biais on a loose rayon challis is really the best way to stretch the fabric out of shape! But what also upset me is that, of course, the stay-stitching appears nowhere on the pictures that come with the instructions (otherwise I guess the author would have noticed the error as well). Same thing a few steps later when one is told to add gros grain ribbon to the same edges: the ribbon is photoshopped on the picture on step 6, then disappears on the following one. On the next page, we are told to add fusible interfacing to a piece whose edges have already been serged… Are we supposed to fuse the interfacing over the serging? Yes, I know, none of it is a big deal, but as a whole it gave me the feeling that a lot of these instructions had been added as an afterthought and not tested properly… 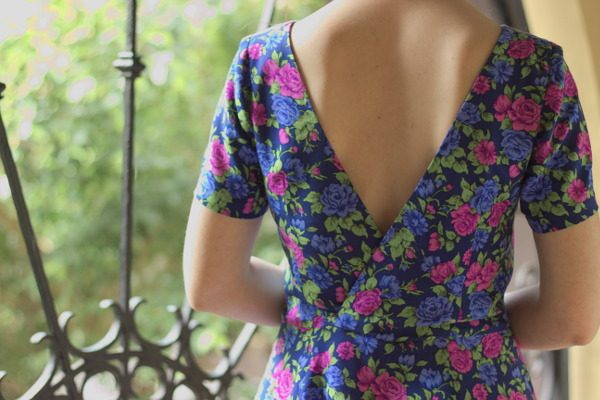 Now that I think of it, I might have done better ignoring the instructions altogether… The fabric I used, a rayon challis from last year’s Gertie’s Jo-Ann collection, would have draped beautifully with the crossed-back. Unfortunately the gros-grain added to reinforce the biais edges pulls the fabric together somehow and makes the back waist seam ride up and stand away from the body in the most inelegant way. It’s a real shame because I think other than this the silhouette of the dress is great and the fit would have been spot on if I had just ignored the ribbon.

I do like the low crossed-back. Unfortunately it is not very bra-friendly… or is it? I spotted these bra converters at Victoria’s Secret: elastic bands that you can hook to your bra and wrap around your waist to lower the back band. No need to spend $14 though: a piece of elastic, and old bra to cut into, and voilà! Here’s a tutorial if you need the same hack. 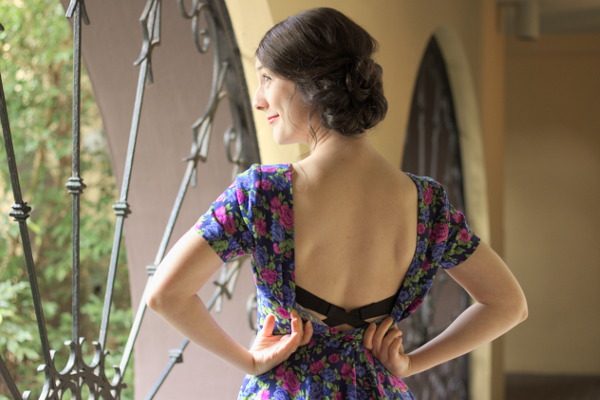 I do like the finished dress: the fabric is wonderful, and the fit and shape of the dress are great and consistent with the line drawing. However, I have to admit that the book as a whole failed to impress me. I was very excited about the concept, the line drawings and the Lookbook app. Unfortunately I was really taken aback by the problems I ran into with the instructions and, honestly, by the pictures of the finished garments featured in the book. Yes, the photography is superb, but I find that the fit of the garments on the models is nearly always off, as if they were all one size too big, and there seems to be construction or sewing issues with some of the samples. That was very surprising, because up to now I had always found Victory Patterns’ samples to be impeccably made. 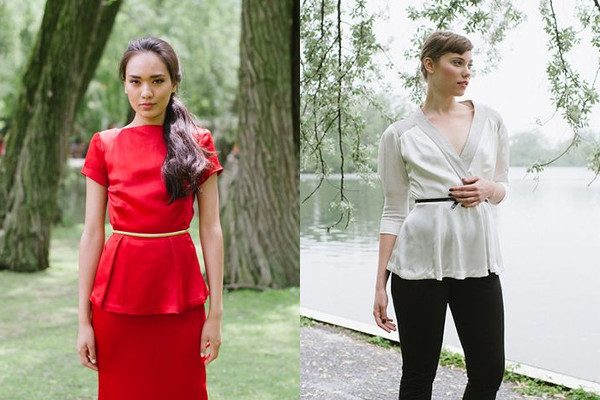 I don’t see myself making another dress from this book anytime soon, but I’m still keeping it around just in case. In the meantime, I have also bought Gertie’s third book, Gertie’s Ultimate Dress Book, which is based on the same concept, and I’m curious to see how the two books compare! 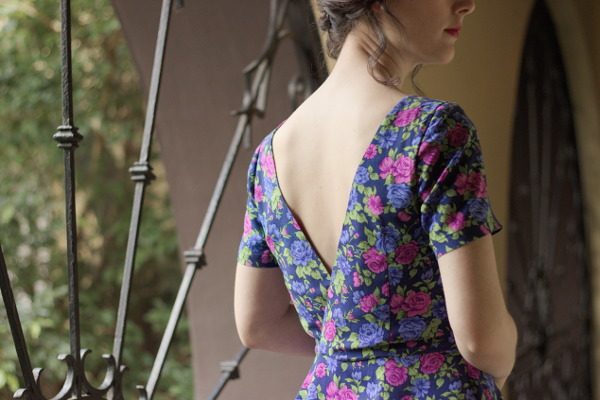