Neoprene vs. Scuba: a study in Zéphyr 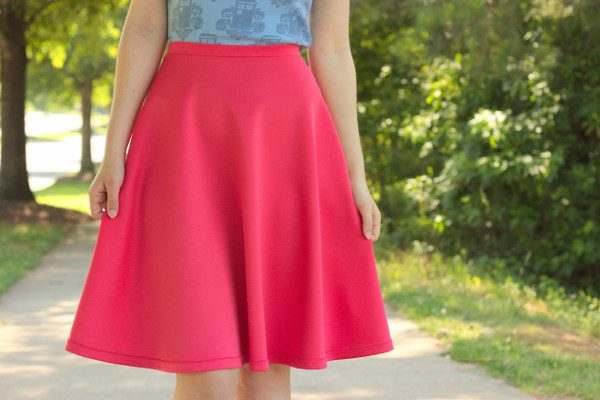 The project I am showing today is so basic that I wasn’t sure it deserved a blog post by itself. It’s a simple Zéphyr skirt, made out of a coral scuba. You know, scuba, this technical fabric that creates voluminous clothing that could almost stand up by itself, like the skirts and dresses made by Sandra, Eléonore, or Jolies Bobines? But wait, my skirt drapes very differently from these, the fabric is much more fluid… What’s the deal with that? Well it turns out that even though the words seem to be used interchangeably pretty much everywhere, scuba and neoprene are actually two very different fabrics! 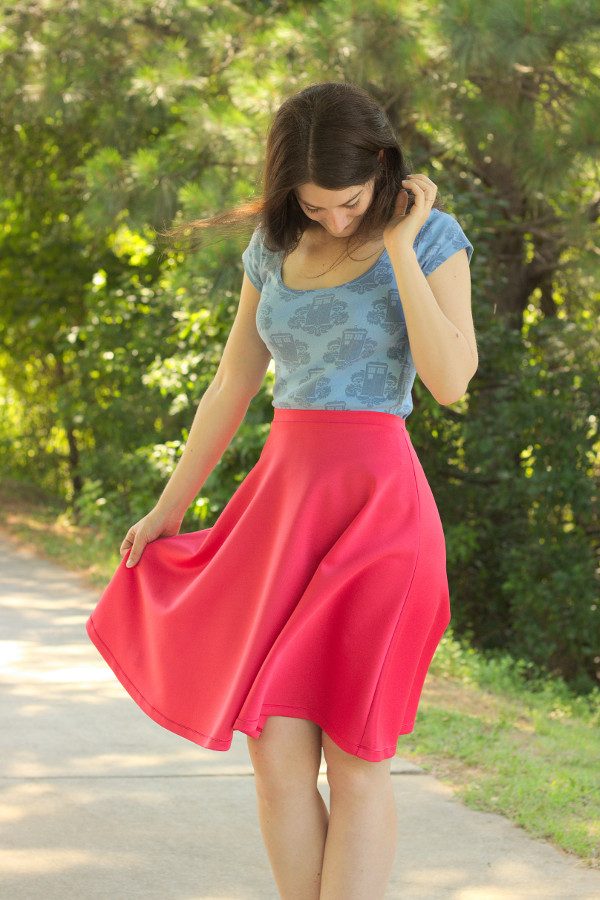 When I ordered this “scuba knit” online, I was expecting a lightweight thick fabric, firm and bouncy, like the one scuba diving suits are made of. After all, it was called “scuba”, so that seemed to make sense. One of the comments on another colorway planted a doubt in my head:

“If you’re expecting a perky scuba knit with a full-bodied drape, don’t get this. I’d call this a medium-weight ponte. It is most definitely not scuba.”

And indeed, the fabric I got was very different from what I had in mind. It was similar to a Ponte knit, but shinier and a little bit more stretchy. 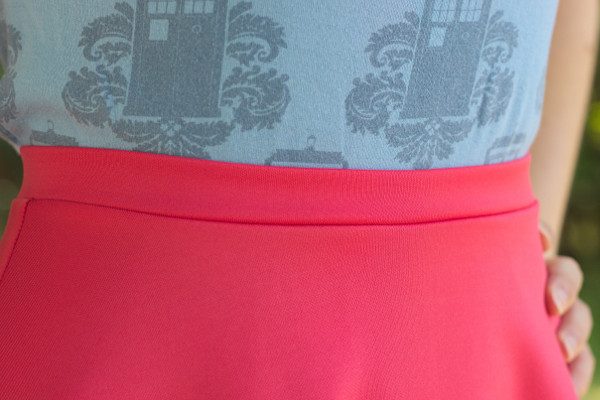 Thanks to this eye-opening blog post from Fiber Fashion Fun, I was able to understand the situation better. Scuba or neoprene? It turns out I’m not the only one to be confused: apparently the two words are often mixed-up in fashion magazines, online clothing stores and even fabric shops, when they actually refer to two distinct types of fabric!

Neoprene is the fabric used for wet-suits: a synthetic rubber foam, or polychloroprene, sandwiched between two layers of fashion fabric, often polyester or nylon knits. It can also be laminated to other kinds of fabric, for instance this velvet-faced neoprene or this one backed with fleece.

Scuba knit is a fabric that was designed to mimic neoprene, but with a much more basic composition. It’s a double knit, made mostly out of polyester. This Seamwork piece is great to learn about the difference between double knits and standard jersey knits. Double knits are thicker, more stable, and can be recognized by the “v” pattern present on both sides of the fabric. Scuba knits are thus similar to Ponte knits, but are made from thinner filaments. 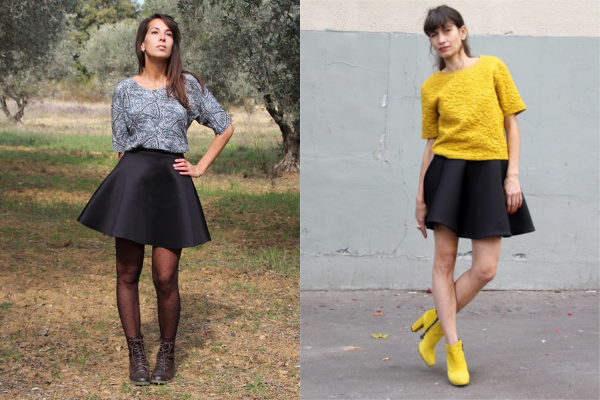 The main issue here is that when buying online, it is often impossible to know which of the two you are purchasing.

You can’t trust the name, since “neoprene” and “scuba” are used interchangeably by most websites. The fabric used by Sandra for her Zéphyr skirt, on the left, seems to be actual neoprene (even if that is hard to say without seeing the cross section!) but the French website selling the fabric, Mondial Tissus, describes it as “neoprene fabric, also called scuba”. The fabric used by Jolies Bobines, on the right, also has the drape of neoprene, but is called “scuba” by the fabric store. On the other hand, Mood Fabrics sells “neoprene/scuba knit” which, from the look of the finished garment and comments, seems to be a double knit.

You cannot trust the fabric pictures either, since they only show the exterior fabric, and never the cross section, nor the fabric composition since websites only indicate the fiber content of the laminated fabrics – I’ve never seen any mentioning polychloroprene or even just neoprene in the composition. Fiber content ends up being the same for a polyester covered neoprene and a simple scuba knit, regardless of the inside foam layer. 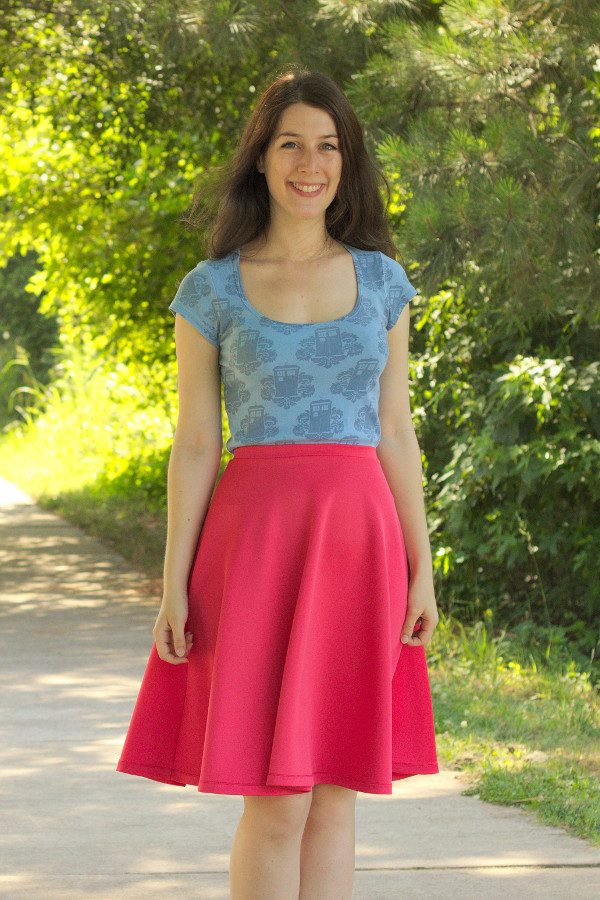 Let’s go back to my Zéphyr skirt. At first I intended to show it alongside my chambray Mélilot shirt, I had even made it with this particular outfit in mind. But since the fabric is a scuba knit and not an actual neoprene fabric, that didn’t work out: the lines and buttons of the shirt show through the skirt. I can’t wear it with anything other than a thin knit t-shirt, and even then the t-shirt’s hem and side seams might still be visible.

Another issue specific to this scuba it that it gets damaged very easily: every time I bump my leg into a table (which happens extremely often) it leaves a mark on the fabric that doesn’t go away, even with steam. I’m afraid this skirt won’t last more than a summer… 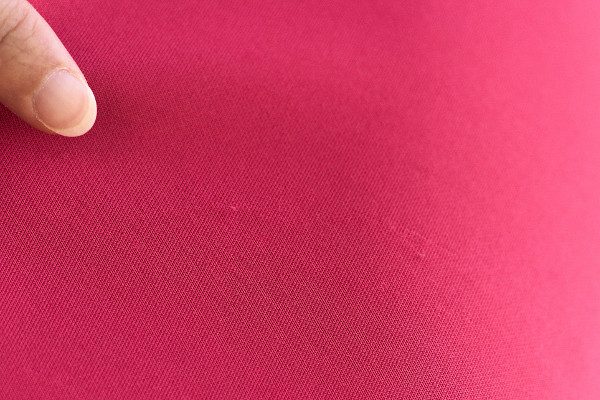 That’s not so bad though, because it was such a quick project: three pieces (front, back and belt), four seams (sewing the sides, closing the belt and sewing it to the skirt), one twin-needle hem and it was done. The only change I made was lengthening it by 7 cm (2 inches 3/4) to make it knee-length, since the original Zéphyr skirt is a bit too short for my taste. 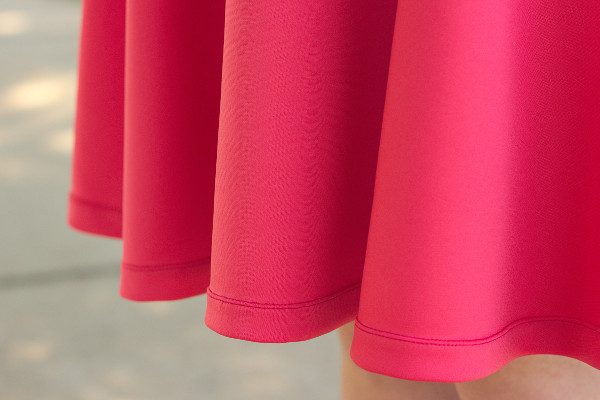 Now that I uncovered this worldwide conspiracy, I feel like sewing an actual neoprene skirt, but I will need to get some in a brick-and-mortar store so I don’t fall into the scuba trap a second time. Have you ever used neoprene or scuba? Did you order it online? Was the fabric what you expected? 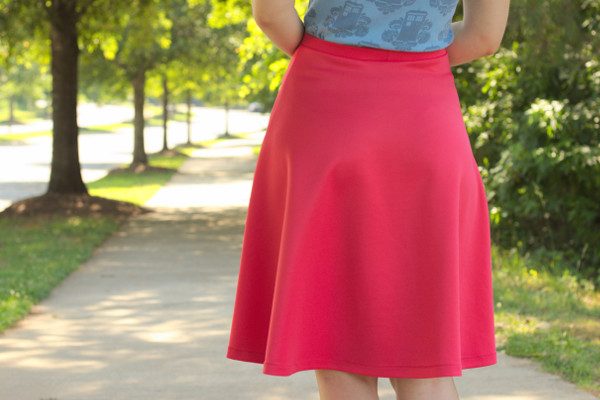