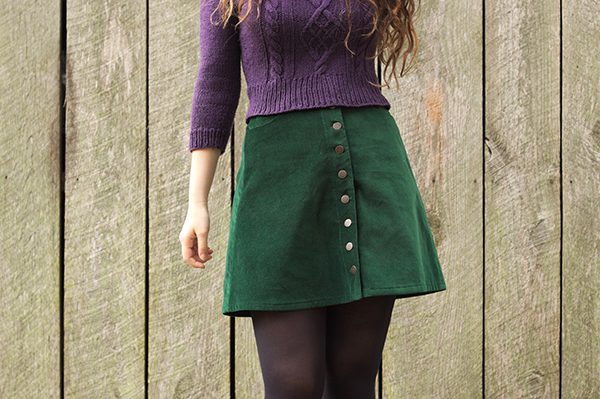 Two years ago, I made a Rosari skirt in denim. I thought I would wear it mainly in the spring, with a t-shirt and sneakers, but it quickly became a staple of my winter wardrobe paired with opaque tights. I wanted to make a new version in a true seasonal fabric: forest green velvet, perfect for the holidays! 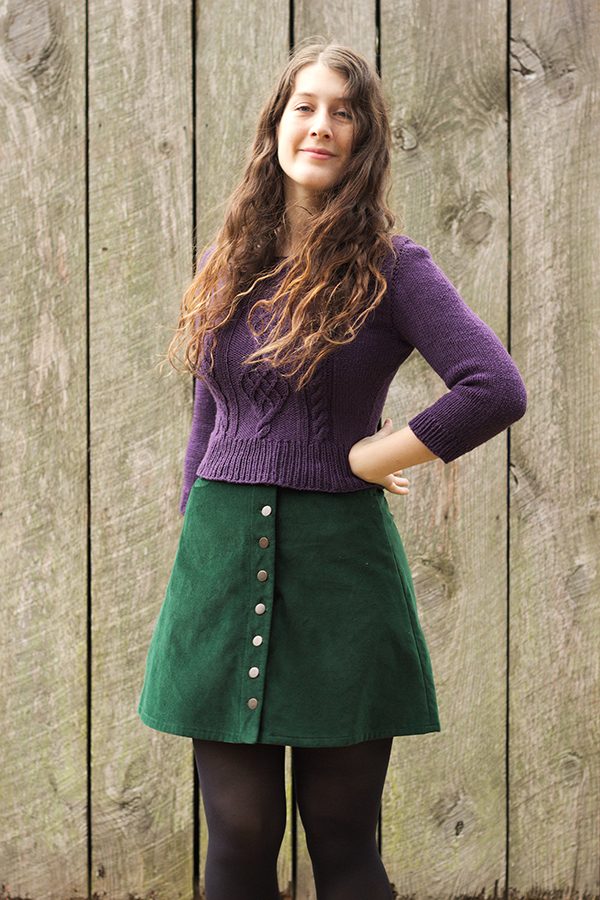 For my first version, I tried grading at the side seams, from a size 36 at the waist to a size 40 at the hips, which created a bunch of issues at the sides and back. This time I went with a different approach: I started with a size 36, following my waist measurement, graded to a size 38 at the hips on the front and back pieces. Then, I did a 2 cm Full Butt Adjustment on the back piece, using this tutorial, to reach a hip measurement of 98 cm and finished measurement of 106 cm, corresponding to the numbers for size 40. 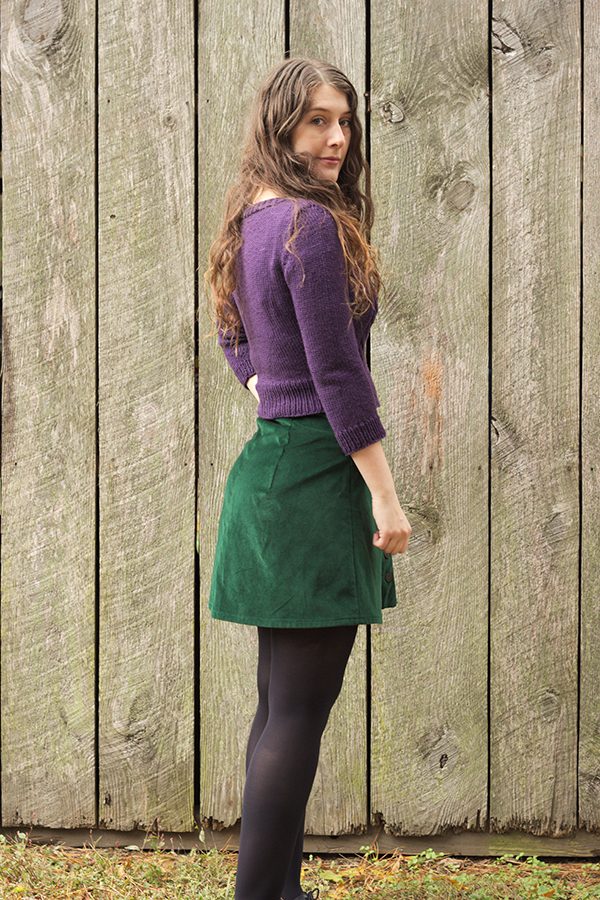 This time I didn’t have to take the sides in, so it looks much better from the front. However 2 cm is a lot for an FBA, and the resulting darts are huge, so from certain angles my butt looks a little… cubic. Next time I’ll need to divide the darts into two on each side, which should look better. There are still a few folds and drag lines, but it’s already a thousand times better than my first attempt: 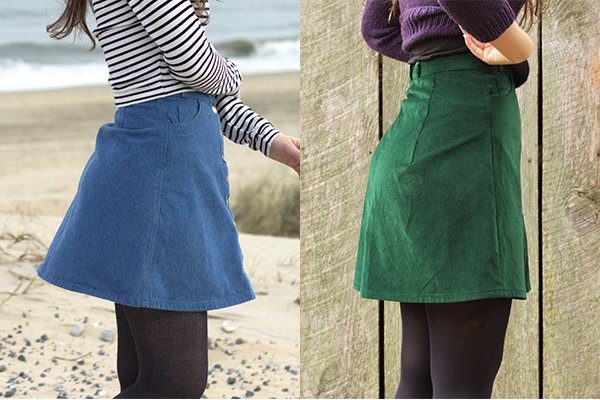 Other changes are the same than on my previous version: I lengthened the skirt by 5 cm, and lengthened the waistband piece by 1 cm so it would match the skirt. I mentioned that issue to Pauline who confirmed that there was an error in the pattern and that she was going to issue an erratum, but I don’t have access to my previous orders on her new website so I can’t check that it has been fixed. Don’t hesitate to measure your pattern pieces before cutting your fabric if you want to sew a Rosari skirt!
For the next one, I think I’ll also change the direction of the buttonholes so they are vertical and not horizontal. I had already thought about that last time, but I forgot and only remembered after making a couple. Since the buttonholes are horizontal and centered on the buttonband, the buttons are not, and that annoys me. 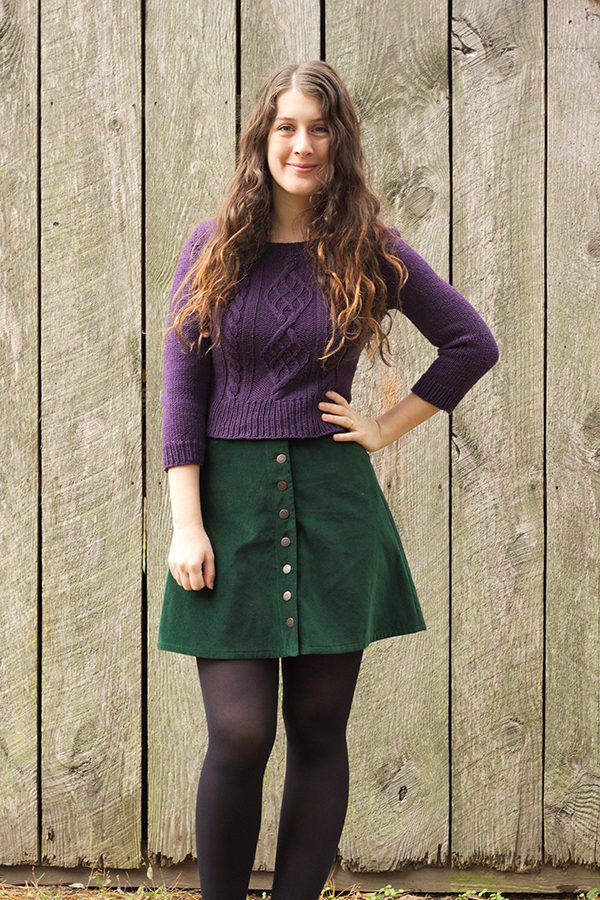 The fabric is this Robert Kaufman velveteen, that I had already used in another colorway for my elvish dress. It’s a really nice fabric to work with, not as difficult as actual velvet but soft and with a very deep color. I cut my pattern with the pile running downwards as I usually do ( = it’s soft when you run your hands top to bottom when wearing the garment). I recently bought some velvet pants from Uniqlo and noticed that the fabric was cut the other way. I’ve heard this makes for a deeper color. I don’t know if there’s a convention… Which way do you cut velvet? 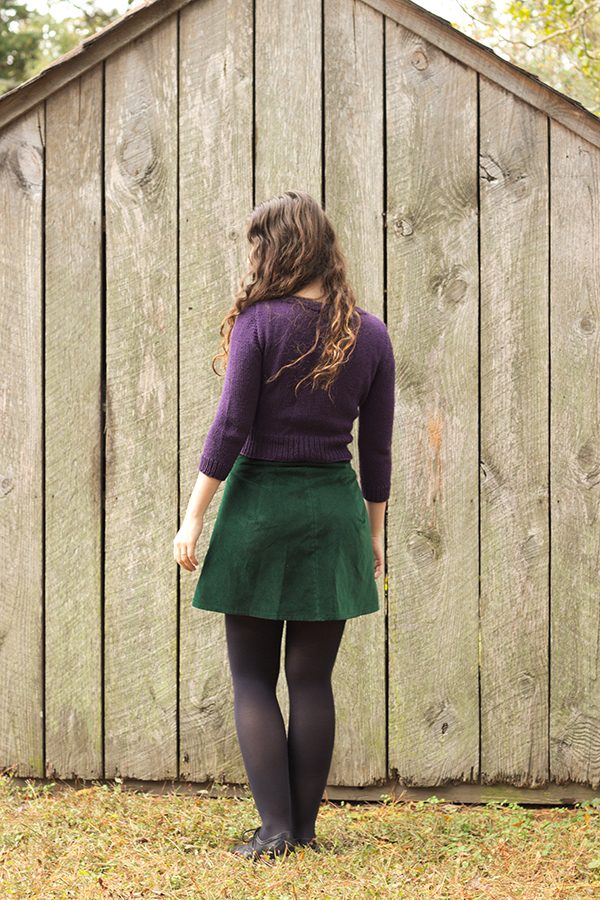 In this green velvet, this skirt is the ultimate Christmas skirt, and now that it is december I have every intention to wear it with a red sweater completely unironically. But I also noticed that this green works with a lot of pieces in my wardrobe, which is mainly blue or generally cool-colored. I especially like this green and purple combo, with this Chuck sweater I finished last year. I also started knitting a sweater in a color named “Aubergine” which is actually halfway between raspberry and plum, and I think it’ll work great with this skirt! 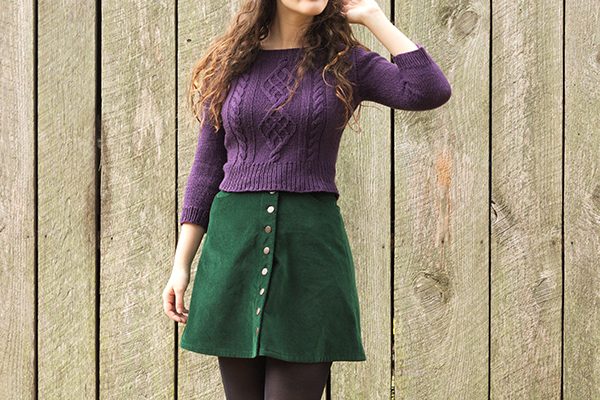