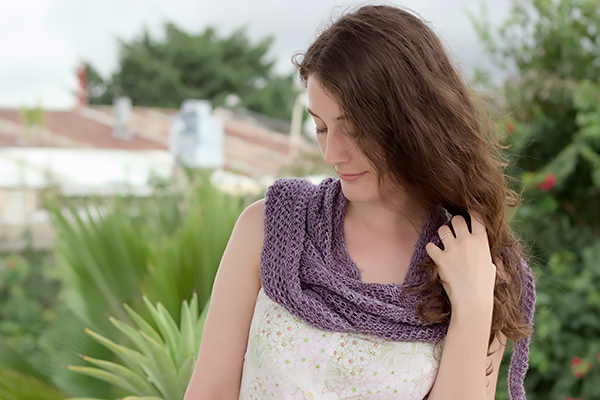 Do you remember my experiment with dyeing yarn with flavored drink mixes? Two years later, I finally knitted something with that skein!

This is the Wave shawl by Kristen Finlay, a free pattern I had spotted years ago: it’s actually one of the very first patterns I had saved back when I found out about Ravelry! I often have a problem with knitting patterns – more so than sewing – that is that I fall in love with a pattern, only to realize later that it’s the color of the yarn used for the sample that I liked, more than the pattern itself. I think this was true with Wave: the pattern is pretty basic, but the blackberry color of the sample is gorgeous, and I could only picture this shawl in a similar color.

Since I’m a complete newbie at yarn dyeing, however, my yarn ended up much lighter than what I had in mind – still pretty though. It seems even lighter now that it’s knitted; I think partly due to the aerated lace, but also because food coloring tends to lighten up with time and sun exposition. I do hope the color will hold on the long term and won’t lighten too much, I like it how it is now.

The pattern itself is nothing crazy, but it works: it alternates sections of Turkish lace and garter stitch, which creates stripes of different opacities. It’s knitted from the point, with very quick increases on the sides, so it ends up as a really flat and long triangle. The last few rows are soooo slow. Actually, the last stripe of garter stitch is supposed to be much wider, but I had to stop early since I ran out of yarn.

I’m not sure if it’s the way I’m knitting that is the issue, but the sides of the triangle (where the increases are) are very tight and I struggled with blocking. Surprisingly the cast-off edge is very supple and stretches easily, when I usually have the opposite problem. I managed to block the shawl by pulling like crazy on the sides, but they are still pretty tight and the point tends to roll up, as you can see on the above picture. Though I like the color and the stitches, I’m not too convinced with the shape: it’s halfway between a shawl and a scarf, and leaves very long tails when I wrap it around my neck, which reminds me of the super skinny scarves from the early 2000’s. Yeah… no.

The dress I’m wearing is a Centaurée I made a few years ago but never blogged about. The fabric is a Michael Miller cotton lawn I had received during a “Secret Santa” fabric swap on Reddit back in 2015. I feel like swaps were a huge thing in the early 2010’s: on Reddit, message boards, they were everywhere in the sewing/knitting communities. I wonder why they’re not a thing anymore. Maybe everybody has a giant to-do list and a stash that is already too big? Maybe the people who used to participate in those ended up disappointed with what they received, compared to the effort put in what they sent? Maybe nobody has the time anymore, and people prefer to focus on projects for themselves? Or maybe the swaps are still there, and I’m just not seeing them?

Anyway, I was very happy with the fabric I got. I wasn’t sure what to do with it at first, since it seemed slightly see-through, so I was considering pajamas, but then we released the new version of Centaurée and I thought it’d be perfect for it. I hemmed and hawed over lining the bodice, but I was lazy, and in the end it was not worth the hassle since it looks just fine with flesh-colored underwear. You can see the difference between this version and my previous version of Centaurée, that I had made with the old pattern: the skirt of the new one is more flared, which I think is more flattering on me. I wear this dress a lot in the summer and it was perfect for my trip to Mexico last month – seeing these pictures now is making me so nostalgic!

What I sewed from the Dressed book