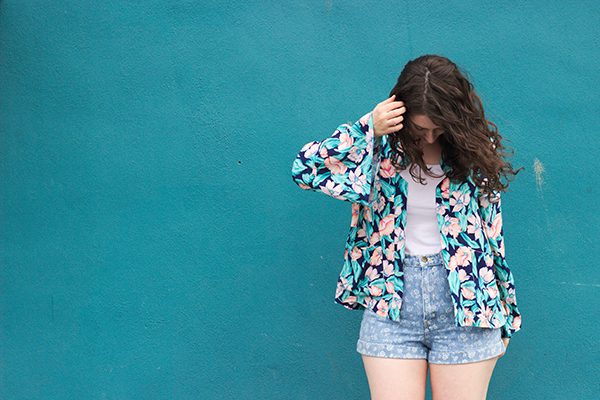 Today’s look is very “2015 Coachella”, with this floral rayon Nénuphar jacket. I’d wanted to post pictures of it for a while, and I thought it could be a good opportunity to bring up the recent discussions around the term “kimono” and share a couple questions about the technical vocabulary that has and/or could be used in its place. Keep reading if that’s a topic you’re interested in! 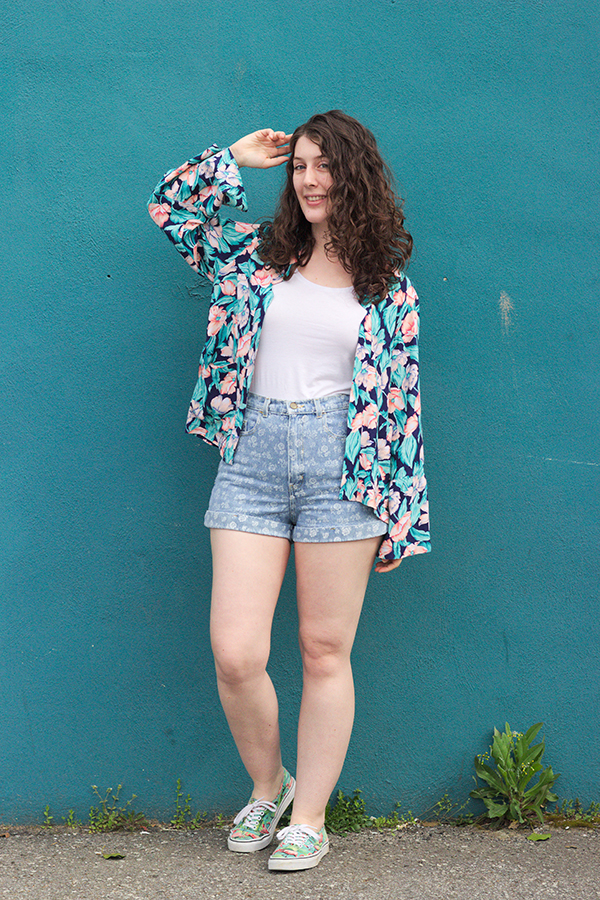 But before we dive into this, a quick word about this jacket: this is one of the test versions I made before the release of the pattern, to check the drape in a rayon challis. This version is actually a mash-up between version A (shorter and with flared sleeves) and version B (longer, with gathered sleeve ruffles). Here I sewed version A sleeves, and added a ruffle about half the size of the one from version B, which resulted in sleeves the same length as version B but with more flare. I really like the sleeves this way, the only drawback being that the gathers are not aligned with the back gathers anymore. 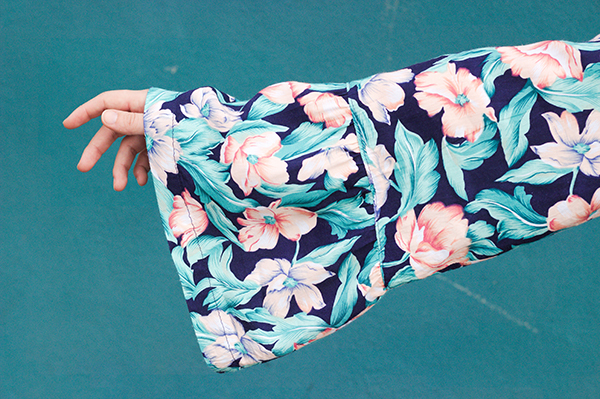 I find it easier to wear that my green cotton lawn version, which has less drape, but I still haven’t worn it much. I think I tend to wear a lot of prints on a day-to-day basis, so when I need an extra layer I’m more likely to grab a solid-colored cardigan (usually grey or navy) – whether with Nénuphar I’d need to plan my whole outfit around the jacket. I like it a lot, though, it’s just that it’s not a piece of clothing that goes easily with the rest of my wardrobe. I wonder if I’d wear it more if it was solid-colored, or if the shape also plays a role here. 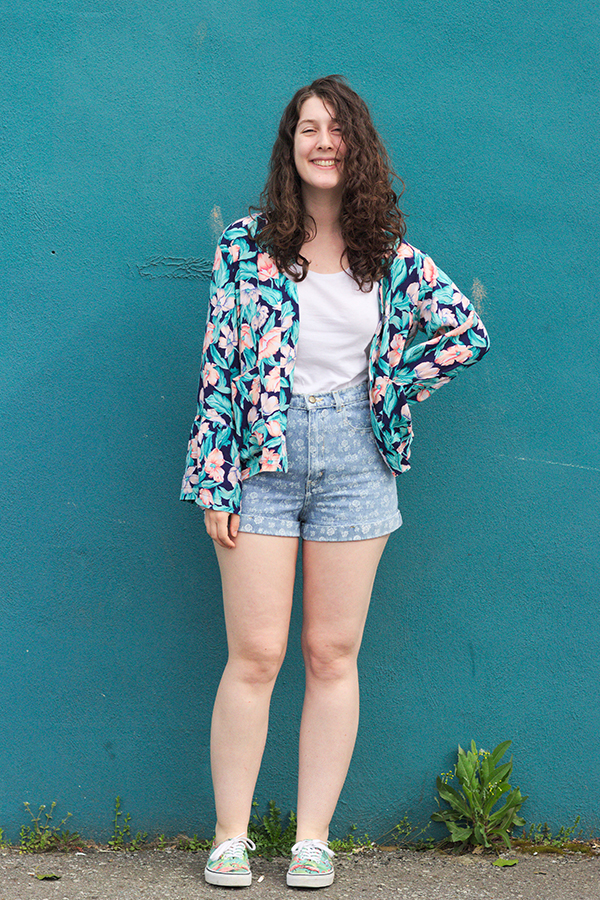 The fabric is a rayon challis from Sewfisticated Fabrics in Somerville MA, where I had already found the red linen from my Fumeterre skirt and embroidered voile from my Chiara dress. Ever since I moved back to the South, I really miss having access to a local source for cheaper fabrics, especially since with Deer&Doe I have to make a lot of muslins: with the new patterns that we are developing at the moment, I’m almost at one muslin per day, which uses a crazy amount of fabric. And while for some patterns I can use actual muslin fabric, for the ones which require knits or drapey fabrics, it’s much harder to find good options… 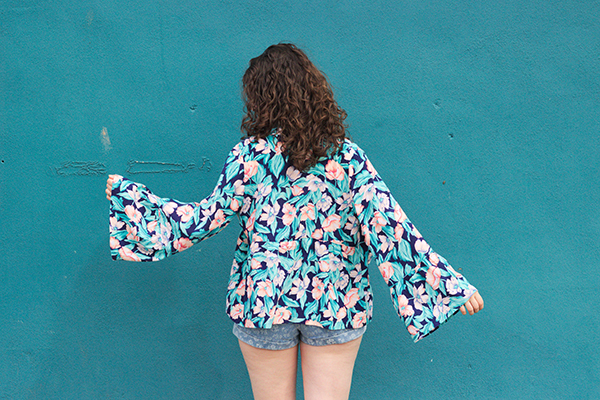 When I lived in Paris, I used to go to Stop Tissus, and in Boston I had Sewfisticated Fabrics, but in Raleigh there’s not much, since the discount stores around here only carry upholstery fabric. So on one side, there’s Jo-Ann, with their crazy inflated prices and continuous sales and coupons system (and with a base price around $13 / yard, it’s not that cheap to begin with), where it can be very hard to find natural fibers. On the other side, a couple indie stores that specialize in quality fabrics, which is great, but I definitely can’t use $20+ Cotton+Steel rayons to make muslins. So I’m trying to stock up on base fabrics when I order online, which means having to anticipate, but so far it’s the best solution I’ve found. 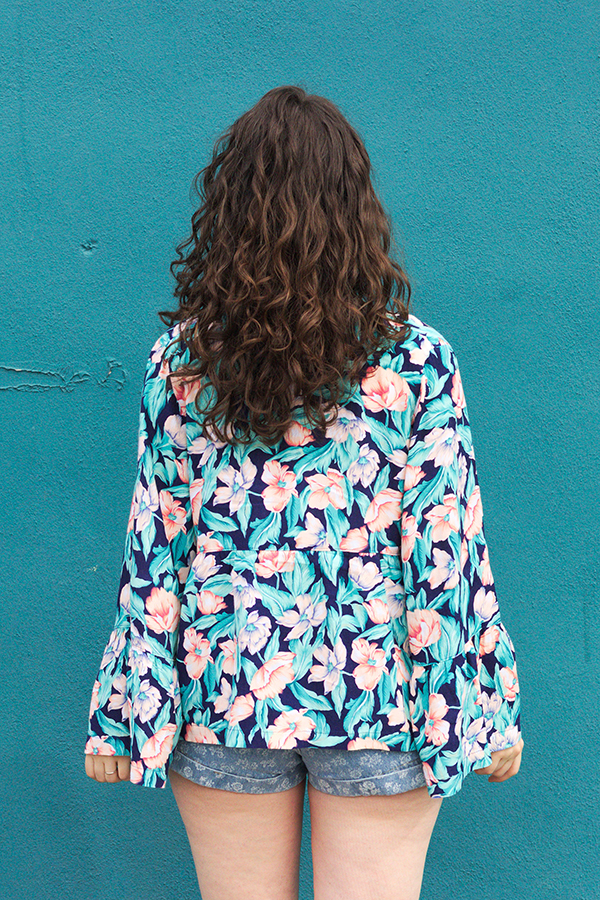 Now let’s get to the topic that has affected a lot of makers and designers in the sewing community lately: the use of the word “kimono”. Though the Nénuphar jacket has always been called a “jacket”, it has also been referred to as “kimono-inspired”: despite not having T-shape sleeves, it has a loose fit, wide sleeves, and an open front framed by a wide neckband, which are all characteristics shared by garments that were until recently called “kimonos”, whether in ready-to-wear or in the sewing community.

Then earlier this year, Emi Ito put out a call to clothing designers (ready-to-wear and sewing patterns alike) to think about their inspirations and the relevance of the “kimono” designation, given the long history and sacred nature of these traditional japanese garments. Following this discussion, many sewing pattern brands made changes to their existing patterns so that their name would be a better reflection of the actual garment: the “Wiksten Kimono” thus became the “Wiksten Haori”, the “Suki Kimono” became the “Suki Robe”, and the “Kochi Kimono” became the “Kochi Jacket”. Deer&Doe removed the “kimono-inspired” mention from the Nénuphar jacket’s description, a mention that didn’t give any extra information about the pattern to begin with. 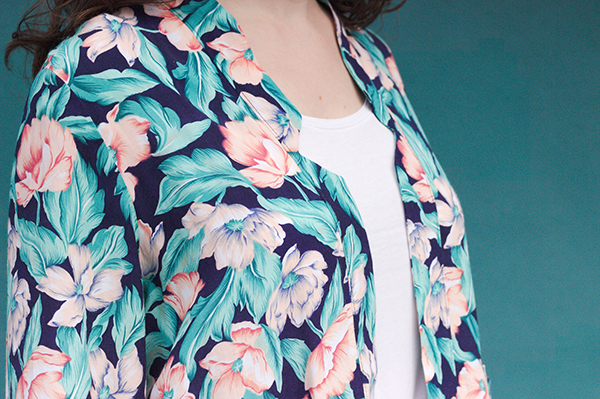 In parallel of the discussions regarding cultural appropriation, which have been led by much more legitimate people than myself, this discussion is also an opportunity to think about the use and definition of certain words, and how these can evolve with time. As you might know, one thing that is very important to me on this blog is to be precise, and I’m very passionate about terminology (see for instance my post about the difference between scuba and neoprene). So I think it’s really interesting to look at what words the different indie pattern brands chose to replace “kimono” for their patterns:
– haori  for Wiksten, who have embraced fully the japanese inspiration behind their pattern;
– robe for Helen’s Closet, Sew Over It, Named Patterns, or even By Hand London;
– jacket for Papercut patterns;
– cover-up for Patterns for Pirates.
In her articles, Emi Ito also suggests the use of duster, or simply coat. There is no right or wrong answer here: the responsibility falls on each designer to choose the term that they feel is the best reflection of their pattern. But I keep wondering: is there a word that refers to these garments that were previously grouped under the erroneous designation of kimono? What’s the name for a “loose-fitting garment with wide T-shape sleeves, between hip and ankle length, with an open-front finished by a wide band, that can potentially be closed with a belt and worn as outerwear or loungewear”? Is that even a relevant concept?

Another thing I’ve noticed is that the term of “kimono sleeve” is also disappearing from pattern descriptions: the Sointu Tee for instance doesn’t mention “kimono sleeves” anymore, but “wide sleeves”. However, in terms of drafting, the kimono sleeve is a very specific construction: it’s a grown-on sleeve that is straight and makes a 90° angle with the body (creating a “T” shape), as opposed to a dolman sleeve that is more angled and gets narrower towards the wrist, and a batwing sleeve that starts very wide and narrows even more. What’s especially interesting is that, from what I can understand, traditional kimonos and haoris don’t have grown-on sleeves but are sewn from rectangles of fabric! If the use of the word “kimono” to talk about these sleeves is not only problematic but inexact, what alternative word can be used to distinguish them from other grown-on sleeves? “T-shaped sleeves” maybe? 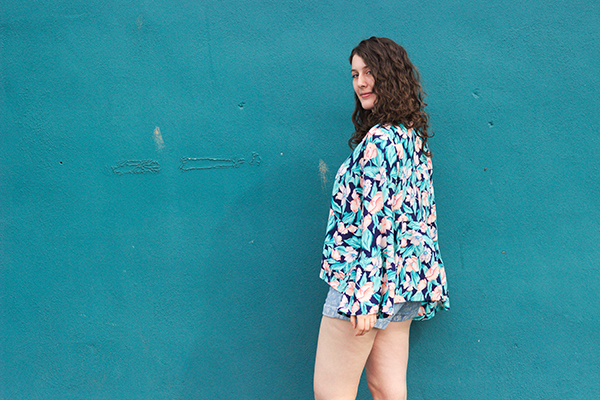